If you are a connoisseur of architectural monuments, then you have a direct road to Connecticut! Many cities in the state are open-air museums. Castle-like colonial New England houses and white-washed churches make a strong impression on tourists. 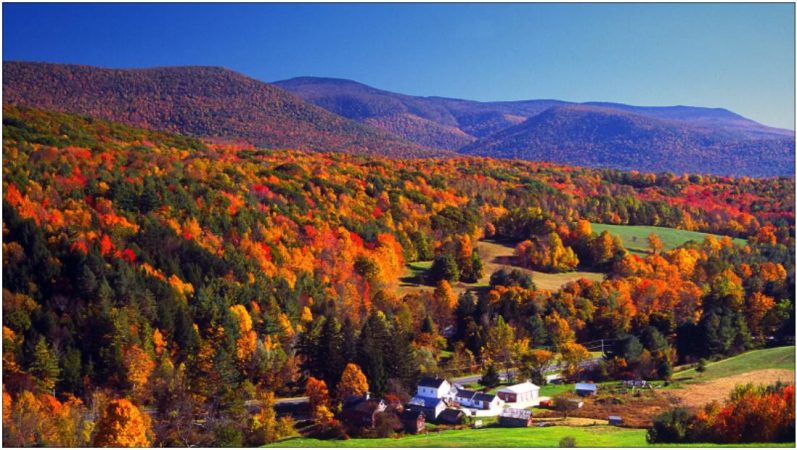 And lovers of hiking and recreation on the ocean coast are attracted by the picturesque nature of Connecticut.

The state capital is Hartford.

Airlines offer to get to Bradley Airport, from where Hartford and Springfield are within easy reach, with a transfer in New York or Washington. Whichever route you choose, the journey will take at least a day.

Search for flights to Connecticut at the lowest prices

The climate in the state is continental, only on the coast, where the proximity to the Atlantic Ocean affects, it is subtropical. Winter in Connecticut is cool, the thermometer drops to -5 ° C. Snowfalls are not uncommon, especially in the northwest of the state. But the summer is hot: +31 °C. During the hurricane season regularly – about 30 times a year – there are thunderstorms, and once a year – tornadoes.

Entertainment and attractions in Connecticut

In addition to the truly magical architecture that can be seen in almost any city in the state, Connecticut is famous for its picturesque nature. Fans of hiking here have a place to roam, or rather, disperse. If you are one of these tourists, then you should go to the west of Connecticut. There, along the border with neighboring New York state, stretches the Taconic mountain range, part of the Appalachians. Here is the highest peak – Mount Bear, or “Bear Mountain”. Its height is 708 meters. And just here is one of the most popular hiking routes in the United States – the Appalachian Trail. It starts in Georgia and passes through the states of North Carolina, Tennessee, Virginia, Maryland, Pennsylvania, New Jersey, New York, Connecticut…

Another tourist route runs along the Metacomet rocky ridge, it crosses the valley of the Connecticut River. The maximum height reaches 312 meters above sea level!

Proponents of a relaxing holiday should go to the south of the state. Along the coast of Long Island Bay, ideal sandy beaches stretch for 350 km. For tourists with children – the most it!

If you see a three-story Victorian house in Hartford, near which is full of tourists, you know: this is the house of Mark Twain. I think the writer needs no introduction. Here Twain wrote The Adventures of Tom Sawyer, The Adventures of Huckleberry Finn, A Connecticut Yankee in King Arthur’s Court, The Prince and the Pauper. Due to financial problems, the writer moved to Europe, and when he returned, he no longer lived in this house.

After the death of Mark Twain, the mansion was an apartment building, a school and a library. And only in 1962 it was recognized as a national historical monument.

By the way, there are other attractions in Hartford that deserve attention. For example, the Connecticut Capitol, which houses the state administration, is rightfully considered the most beautiful building in the city.

The building is built of marble and granite, its dome is lined with gold sheets.

In 1972, the Capitol was declared a US National Historic Landmark. Bushnell Park, home to the Capitol, is the heart of Hartford. Here the townspeople relax and have fun, come to listen to the performances of orchestras on the open stage, to watch the performances of the summer theater. The park houses the Pump House Gallery, which exhibits works by contemporary artists.

In the aquariums of the recreated Mystic port village, you will see whales, fur seals, penguins and many other inhabitants of the aquatic world. And the seaport will send you to the 19th century and take you through the old sailing ships.

In the city of Farmington, tourists go to see the First Church of Christ. It was built in 1771 and was used as a meeting house. From the high bell tower you can see the surroundings for several kilometers. In 1975, the church was included in the list of the most important attractions in the United States.

In this recreated port village, visitors of all ages can’t help but smile. In the famous Mystika Aquariums you will see whales, fur seals, penguins and many other inhabitants of the water world. And the seaport will send you to the 19th century and take you through the old sailing ships.

This Connecticut city is famous for being the birthplace of George W. Bush, the 43rd American president. And at the beginning of the 18th century, Yale University began to work in the city, which is now considered one of the most prestigious in the United States.

Yale alumni include 49 Nobel Prize winners and five US presidents!

Like Louisiana, gambling is legal in Connecticut. Here you will find the so-called Indian casinos. The US’s largest and most profitable Foxwoods Casino Resort in Ledyard and Mohegan Sun Resort & Casino in Montville. Like the famous gambling establishments of Las Vegas, local casinos attract visitors not only with games, but also with concerts, boxing matches and other entertainment.