In some countries in Asia, such as Bhutan, Thailand or Sri Lanka, Buddhism is the religion of the majority of the population. Nowadays, it is the fourth religion in the world in number of believers.

Location and chronology of Buddhism

It had its time of greatest development between the 1st and 9th century CE, when it reached all of Asia and became the religion with the largest number of followers in the world. Buddhist monasteries were centers of culture and prosperity from India to Japan.

The foundations of Buddhism

It is said that the Buddha systematically exposed the key to his ideas in the so-called Benares sermon, in which life is conceived as pain.

The sermon of Benares

The main idea of ​​Benares’ sermon is that found in the following excerpt: “This is the truth about pain: being born is pain, growing old is pain, getting sick is pain, dying is pain, joining with what is not we like it is pain, separating from what we love is pain, not getting what we want is pain (…) The cause of the pain is the thirst that makes us want to live again, to seek what we like (…)

But in order for the pain to disappear, it is necessary to cancel this thirst for existence, to reject it, to get rid of it.

The path for the pain to disappear has eight parts: right opinion, right thought, right word, right activity, right livelihoods, right effort, right attention and right concentration. This is the noble eightfold path that extinguishes pain and leads to liberation ”.

Buddhism starts from the affirmation of the inescapable character of pain. He believes that there are different types of suffering that human beings encounter throughout life. There are situations that definitely produce anxiety and pain, suffering, for example, the presence of illness, the fear of old age, the fear of loving and not being loved or of loving and losing the loved one, the fear of failing in life and not achieving goals, being subject to something that you dislike, or having a bad character that produces rejection in others, although this is often not consciously accepted.

Hence, Buddhism considers pain to be universal, Even in the greatest pleasure the pain hides, since at some point it will end and the pain will return again. This is what Buddhists call the first noble truth.

The second noble truth exposes that the cause of the pain is the desire to return to live, to seek what is loved. The problem, according to Buddha , is that we always or almost always wish for a selfish end and this ends up producing greater suffering. The solution would be to suppress pain by eliminating the thirst to exist. But this suppression is not a complete renunciation of life. It is a transformation of the points of view that govern living, through understanding, acting and meditating. This is the third noble truth.

The fourth noble truth sets out how to overcome this desire and end suffering. It has eight parts and is what Buddhists call the “noble eightfold path”.

Sermon can be defined as a religious speech by a priest before the faithful.

Among Christian sermons, the most famous is the sermon on the mountain of Jesus of Nazareth (Matthew 5,3-10), in which a message of hope is transmitted. In this sermon, one can find parallels with that of Benares with regard to the inevitability of suffering.

According to Buddhists, through eight different ways, suffering can be ended.

The first is the correct word , which consists of speaking without harming anyone. That means not lying, talking kindly, avoiding gossip, injury and slander.

The correct activity is to act without harming anyone. It also makes reference to the development of virtue and the domain of the passions.

Correct way of life is to exercise a profession that does not harm anyone. According to Buddhism, the first person who should not be harmed is himself. The parts that have to do with understanding correctly are: correct opinion and correct thinking , which are equivalent to understanding with wisdom. In order to avoid mere assumptions or erroneous opinions about something that has happened, a self-examination is important before making a value judgment. Therefore, Buddha claimed that self-knowledge leads to liberation, which is achieved through meditation. Hence , effort , attention and concentration should be practiced as mental activities. The effort is made in meditation, attention and concentration in what one meditates.

Buddhists cannot harm any living thing, they cannot kill animals. Therefore, many Buddhists are vegetarians. In addition, many Buddhist monks live very austerely and eat no more than one meal a day before noon. But this diet, which was easy to follow in India, with a hot climate and which produces many different vegetables, is not possible in regions with harsh climates, for example in Tibet, where it is very cold and few plant foods are produced. Despite being Buddhists, Tibetans, including monks, eat meat if necessary and eat three meals a day.

On the one hand, Buddhist monks adopt certain customs and customs from the area of ​​Tibet where they settled. On the other hand, this adaptation only occurs when necessary for survival, because, if this were not done, the principle of the noble eightfold path would be compromised, according to which one should not harm oneself.

These prohibitions are also present in other religions: in Hinduism, it is forbidden to eat beef; in Islam and Judaism, pork is not allowed to be eaten. Israelis even have a list of prohibited foods. 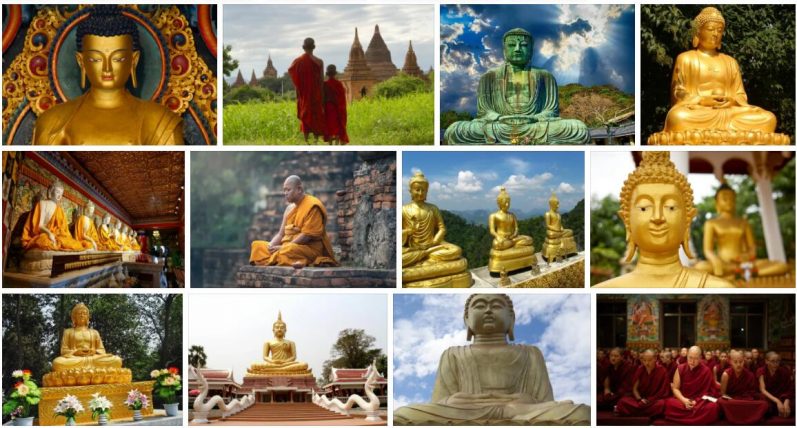