Buddhism is a universalist religion, which means that it has a message that can be used by anyone, without distinction.

Buddhism: a religion for all

After the death of Buddha and before the reign of Emperor Asoka (273-231 BCE), the Buddhist community, despite the missionary expansion, was still a minority group. It was a small-scale religion centered on the definition of dogmas that permanently split in different ways and of which one can have few historical certainties. However, this religion, born in North India, would become, thanks to Asoka, one of the great world creeds.

Its universalist character, in proposing a message acceptable to any human being regardless of their circumstances and origin, favored its expansion and, in fact, Buddhists were great missionaries.

A very important moment in the expansion of Buddhism took place during the reign of the Indian emperor Asoka. A great conqueror, his armies dominated a very large territory, in which there were many religions. Buddhism had the advantage of serving any of its subjects. Asoka became a Buddhist and not only gained a large part of India for Buddhism, but also sent missionaries to the kingdoms and territories with which she had contact, including the West.

Over time, Buddhism, following the trade routes, and especially the silk route, reached Afghanistan, China and then Japan: through the south, Sri Lanka, Indonesia and Indochina; later, from the north, to Tibet. A thousand years ago it was the religion with the largest number of believers worldwide.

In early March 2001, the Taliban, an extremist group that then dominated Afghanistan, partially destroyed the giant Buddha statues in Bamiyan. The largest of them was almost 53 m high, and was a testament to the strength that Buddhism had in the past in this region.

The expansion of Buddhism

Buddhism, having reached different people, made missionaries adapt to customs and beliefs. And what they call “skillful means” in the spread of religion. As the central Buddhist message is simple and seeks mainly to awaken, they were able, without ceasing to be Buddhists, to offer, in each case, the easiest thing that resulted to be understood and accepted.

In this way, the Buddhist communities were and still are very different, they eat and dress differently, they change their parties, ways of meditating or funerary rituals. Even their idea of ​​Buddha varies: some see him as an exceptional and exemplary human being, while others believe that he is a supernatural being.

Buddhism and Christianity are similar in some ways. For example, the two disappeared almost completely from the places where they appeared.

Today, in the areas where Jesus preached, the Christian population is few in number. In the Palestine-Israel region, since 638, when Muslims took over Jerusalem, Islam was the predominant religion, except in very sporadic moments such as the crusades. Today, there are many churches of different denominations but very few Christians.

In Israel, just over 1% are Catholics, with just under 1% Orthodox and 0.2% Protestants.

In Palestine (West Bank and Gaza), 4% are Catholics and 4%, Eastern Christians. The vast majority of the population is Jewish or Muslim.

There is also a parallel in the expansion of both religions. It was essential for Buddhism that Emperor Asoka adopted this religion. In Christianity, something similar happened with Emperor Constantine,

Christianity is also a universalist religion, since, since the preaching of Saint Paul, it did not take into account class differences or status of any kind, and wished that its message reached and helped all of humanity, although in the early moments of Christianity there was groups that thought you couldn’t be a Christian without being a Jew. Christian universalism comes from openness to non-Jews who, following Saint Paul, accepted the vast majority of Christians.

In both cases, there are historical connections between political power and religion. The rulers of universalist religions can homogenize their subjects through them and create cohesion around their power thanks to ideology, which is a less costly way of control than the military.

Thanks to Emperor Asoka, Buddhism experienced a remarkable expansion, reaching most of the Indian subcontinent and reaching distant regions. Asoka adopted Buddhist ethics as the guiding principle of his reign and enacted numerous edicts, which were placed on stones and columns in different languages. But he also defended mutual respect and tolerance, since he believed that all religions contributed to spiritual development.

Constantine was instrumental in the history of Christianity. In the year 313, he enacted the edict of Milan, which granted freedom of worship to all Christians in the empire. At that time, other religions coexisted, in addition to the traditional religion of Rome, such as the veneration of Mitra and Judaism. Constantine said he had a vision of the cross before the decisive battle that gave him control over Rome and attributed the victory to the intercession of Jesus Christ .

From that moment on, he ordered a cross to be placed on his guard’s insignia, protected the Christian bishops and relied on them to remain in power. 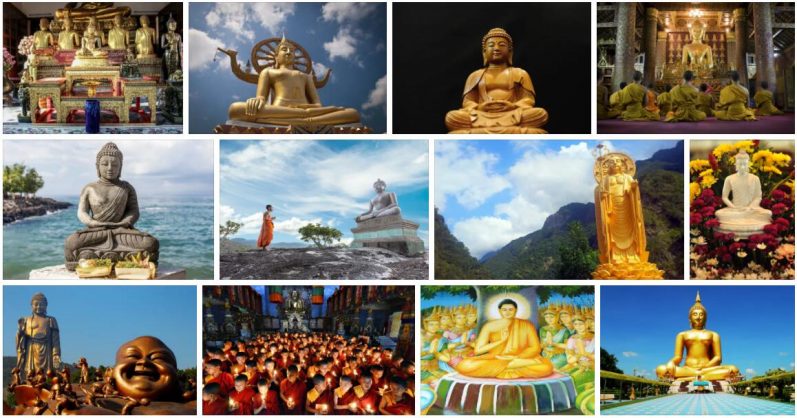