Mecca is the holy city of Islam par excellence, followed by Medina and Jerusalem. It is located in the west of Saudi Arabia , an inevitable passage of trade routes, which has led Mecca to become an important point of confluence.

Since Muhammad changed the quibla, which previously pointed to Jerusalem , Muslims have directed their prayers in the direction of Mecca five times a day, which demonstrates its extraordinary importance.

Mecca was an important confluence point for trade routes. It was also a first-rate religious center around the Kaaba, a cubic-shaped sanctuary where the cult statues of more than three hundred gods from different Arab groups and tribes were kept. The faithful wandered to Mecca, to request favors from the gods, under the protection of the truce that for four months a year protected the sanctuaries from the aggressions and revenge, so common among the Arab tribes.

The main god in the Mecca sanctuary was Allah , which means “god”. This important deity guaranteed the fulfillment of the oaths, provided the rain and was the creator of the world.

He was worshiped along with his daughters, Al-Lat, Al-Uzza and Manat, who was a goddess of destiny.

The guardians of the sanctuary were the members of the tribe of the Quraisíes, to which Muhammad belonged , called Muhammad in Arabic.

In a few years, Muhammad managed to reform ancient polytheism and unify the Arab tribes around a religion that recognized Allah as the only god.

The pilgrimage to Mecca

The fourth pillar of Islam is precisely the largest pilgrimage to Mecca . Every adult Muslim who is physically and economically fit should do it at least once in his life.

Muslims thus look back on Muhammad’s return to his hometown the year he died, and the ritual possession of what was a pre-Islamic center of worship, centered on the Kaaba .

The rite requires pilgrims to observe a series of rules, starting with clothing . They must wear a white two-piece suit without any kind of adornment. This simplicity suppresses any social difference between them. In addition, they must refrain from bloodshed and acts such as cutting nails and hair.

The deaths of elderly pilgrims are not uncommon, given the physical effort and the harsh climate of the region. Contrary to what it may seem, it is considered a blessing to die fulfilling this Islamic obligation, since, according to tradition, the sins of the believer are forgiven.

The development of communications and transport has facilitated the fulfillment of the duty of pilgrimage to Muslims from all over the planet. An example of this is the massive turnout in Mecca, where millions of people gather every year.

The pilgrimage to Mecca begins at the Grand Mosque. The Muslim must go around the Kaaba seven times, in a counterclockwise direction. He must also run seven times between the two mounds near the sanctuary, Safa and Marwa , in memory, according to tradition, of Hagar, Ibrahim’s repudiated wife, who tirelessly sought a source to drink his son Ishmael. Soon you will have to walk eight kilometers without stopping to Mina and sixteen to Mount Arafat , to stay there, meditating and listening to the afternoon sermon.

The next day, he must cover an eight-kilometer leg to Muzdalifa , another one of equal distance to Mina and the return to Mecca . In the holy city, imitating Ibrahim in his attempt to sacrifice his son Ishmael by divine mandate, he sacrifices an animal in honor of Allah, usually a sheep.

Finally, again take a walk around Kaaba. This annual pilgrimage unifies Muslims from all over the world, and having completed it makes them highly valued socially when they return to their places of origin.

The Great Mosque, called Beit Alá , which means “the house of Allah” in Arabic, contains Kaaba , a cubic and windowless sanctuary that, according to tradition, was built by Patriarch Ibrahim, Abraham for Jews and Christians, and his son Ismael.

The four sides of this building are covered with black silk, renewed annually, coinciding with the time of the pilgrimage. The “Tapiz Sagrado”, a denomination that receives this wrapper, has two openings that allow you to see the sacred stones, among which stands out, for the special devotion of which it is an object, the Pedra Negra , located on the south corner of Kaaba. 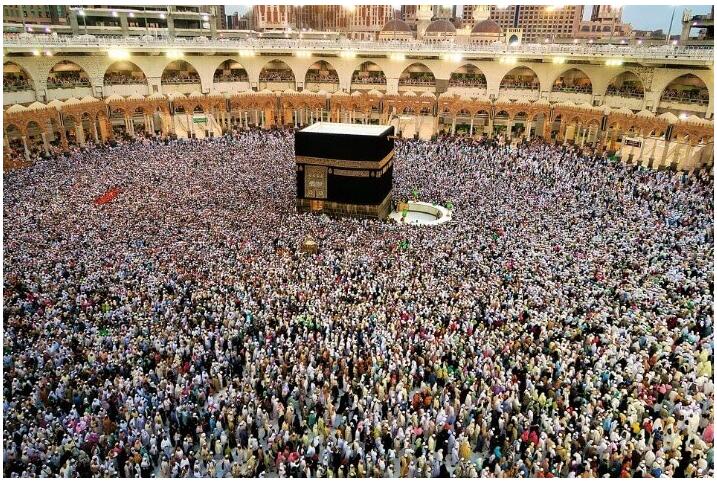