Georgia is a state on the southeast coast of the United States. It is worth starting your acquaintance with it from Atlanta – the capital and the main transport hub of the state. In the north of the state, mountain ranges begin, among which there are national parks and protected forests. From there you can head south along the Atlantic coast towards the city of Savannah with its stately 19th century mansions, chic island resorts and nature reserves.

It was in Georgia that Coca-Cola was invented in 1886. 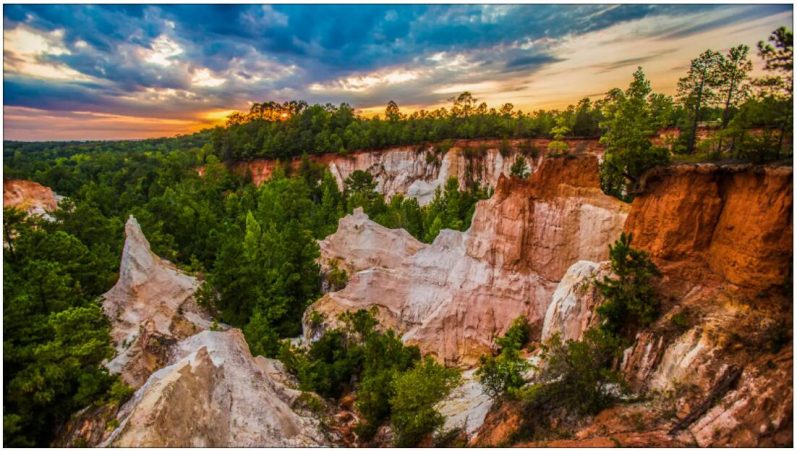 The main highways connecting Atlanta with other American cities are I-75 (from Detroit to Florida), I-85 (from the Atlantic to New Orleans) and I-20 (to Texas). Savannah is accessible via I-95 and I-16; to Augusta – along the I-20 highway connecting Atlanta and Columbia (South Carolina); in Valdosta – along I-75. Traveling to Columbus from the north, take I-185; from the south, take Highway 66 through Fort Benning, then along I-185; Highway 80 leads into the city from the east, Highway 431 from the west.

Hartsfield-Jackson International Airport is located 12 km south of downtown Atlanta and is one of the busiest air hubs in the world. From there, connecting flights are operated to Savannah, Augusta, Columbus, Macon, Valdosta.

Georgia is located on the coast of the Atlantic Ocean, so it often suffers from hurricanes that cause a strong tropical storm with heavy rain, as well as tornadoes from the coast that sweep away everything in their path to the north. The climate in the state is subtropical oceanic, there is a hot, humid summer: the air temperature sometimes reaches +44 ° С.

A bit of history

Like many US states, Georgia was originally inhabited by numerous tribes of Indians, but they and their culture were destroyed by Europeans in the 17th and 18th centuries. Those who survived moved to other states, and the territory became a tasty morsel for settlement by white people. Since the geographical position of Georgia was very advantageous – access to the sea, hot climate, fertile land, this land often changed hands and was even considered an independent state until it became part of the United States. It is interesting that, unlike neighboring southern states, slavery was at one time prohibited in Georgia. But when it turned out that the state’s economy was lagging behind the level of South Carolina, Alabama and Mississippi, the planters were still allowed to use black slaves.

The first European settlement in what is now the United States was the colony of San Miguel de Guldape, located on the lands of present-day Georgia.

Georgia was sent en masse with prisoners from Europe, so it did not have a very good reputation, although many free colonists lived there. The first settlers landed on February 12, 1733 at the site where the city now stands.

Entertainment and attractions in Georgia

Atlanta is famous for its parks and skyscrapers. Of the main attractions of the state capital, it is worth highlighting the Coca-Cola Museum and the largest oceanarium in the Western Hemisphere, which even keeps whale sharks (these animals can only be seen here and in Asian aquariums). Until 2012 it was the largest in the world until it was eclipsed by the Singapore Aquarium.

It was in Atlanta that Margaret Mitchell wrote the novel Gone with the Wind, many episodes of which take place on Peach Street, where the writer lived for many years. In the same place, on the corner of Persikova and 10th streets, there is a house-museum of the writer. Here she lived from 1925 to 1949. The house was inhabited until the end of the 1970s, and then for a long time it was abandoned. In the eighties, enthusiasts restored the house, whose occupant made Atlanta famous, and it was given the status of a landmark. Now here you can see the apartment of Margaret Mitchell, her workplace, personal belongings, watch documentaries, listen to a tour. Part of the exposition is devoted to the novel Gone with the Wind. Address: Georgia, Atlanta, Crescent Ave NE, 979; more details: Margaret Mitchell House Museum.

The famous street of Atlanta is not named so by chance: one of the unofficial names of Georgia is the Peach State, since it is the leader in the USA in growing these fruits. For the same reasons, Georgia is also called the pecan state and the peanut state.

To the east of Macon is the Okmulgee National Monument, a historical and archaeological site of the indigenous cultures of the southeastern United States. In Augusta, the luxurious mansions of planters and cotton merchants have been preserved. In Columbus, it is worth a look at the Naval Museum, the Space Science Center, which includes 7 flight simulators and a planetarium, and the National Museum of the Infantry.

There are several nature reserves in the mountainous regions of Georgia, among which the Chattahohoochee-Oconee National Forest and the Georgia Black Rock Mountain State Park are considered the most picturesque.

Chattahoochee-Oconee consists of two national forests of the United States – Chattahoochee and Okoni with a total area of ​​3500 square meters. km. There are 10 wild areas, 3,300 km of rivers and streams, more than 720 km of hiking trails and 2,600 km of “roads” under forest protection. In addition to the Chattaga River and the upper Chattahoochee, natural attractions include the start of the Appalachian Trail, which stretches for 3,499 km.

Georgia Black Rock Mountain State Park (literally translated “Black Stone Mountain”) in the very north of the state near the border with South Carolina, located on an area of ​​​​7030 square meters. km, got its name due to the dark color of the local rocks. In addition to Black Rock Mountain Peak, the park has 4 more mountains over 910 meters high, making the park the highest in Georgia.

In southeast Georgia is the Okifinoki National Wildlife Refuge, one of the largest wetlands in the United States. The Okifinoki Marshes, formed over the past 6,500 years, are considered one of Georgia’s seven natural wonders.

A chain of islands stretches along the entire Atlantic coast of Georgia. Due to the mild climate, four of them – St. Simons Island, Sea Island, Jekyll Island and Little St. Simons Island – have received the name “Golden Isles of Georgia”.

After the American Civil War, almost all of the Golden Isles became elite resorts visited by the richest American families.

Jekyll Island boasts of its fascinating history. For almost a hundred years, the Dubinnon family of French emigrants owned the island. In 1886, some of the richest people in the United States bought the island for $125,000 as a hunting resort. Among them were the largest American businessman of the 19th century Cornelius Vanderbilt, industrialist William Rockefeller, banker and philanthropist John Pierpont Morgan, newspaper magnate Joseph Pulitzer, banker Charles Richard Crane, who was interested in Russia and its culture, and others. Together they formed the Jekyll Island Club, a millionaire club.

In 1887, by their order, a club house with 60 rooms was built on the island, and in January 1888 the official opening of the season took place. Between 1886 and 1928 mansions sprawled along the marshy part of the island, protected from the ocean, the largest of which now houses a romantic Victorian hotel. Throughout the history of the club’s existence, there were 3 golf courses on the island, a marina for chartering yachts, tennis courts, a swimming pool and a croquet ground were built.

With the onset of the Great Depression, club members became disillusioned with their acquisition and were tempted by European resorts. During the Second World War, the island was completely empty, and in 1947 it was sold to the state of Georgia. In 1978, 240 acres of land owned by the club were declared a National Historic Landmark. Now the island is open to everyone.

Cumberland Island is home to a National Seashore Preserve that protects beaches, dunes, swamps and freshwater lakes. There are two estates on the territory of the reserve: Dungeness (1736) and Plum Orchard (1898).