Welcome to the hospitality state! This is the unofficial name of Mississippi – the twentieth state of America. It got its name from the river of the same name, the name of which was given by the Ojibwe Indians. “Mississippi” is translated as “big river”, and it really is – it is the largest river in North America. Its length is 3,770 km, it flows through ten states. Mississippi is also known as the Magnolia State. 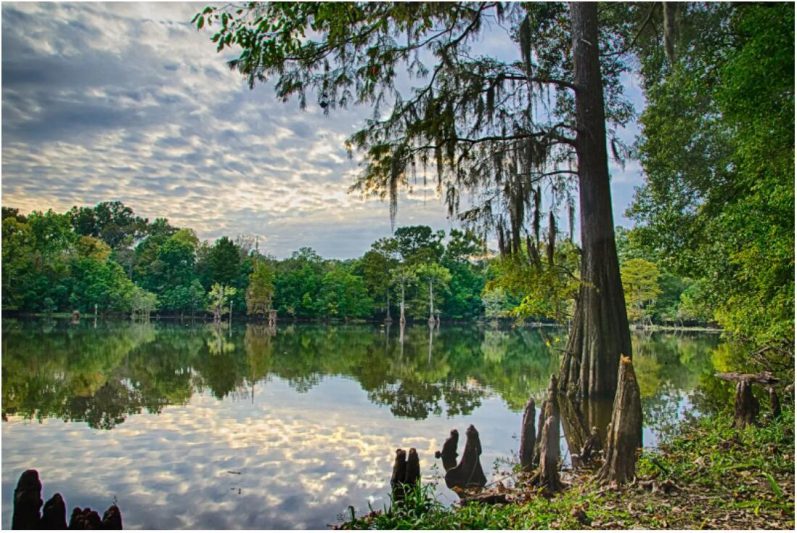 The state capital is Jackson.

The state of Mississippi gave the world writer William Faulkner, playwright Tennessee Williams and the king of rock and roll Elvis Presley. And this is where the blues was born!

To get to Jackson, you first have to get to Washington. From Moscow 10 hours fly. And already from Washington, you can fly directly, or with a transfer in Atlanta, to the capital of Mississippi. The journey will take a little less than 3 hours. Tickets on US domestic flights are inexpensive.

The climate in Mississippi is subtropical, with long, wet summers and short, warm winters. The average air temperature in July is +26 °C, and in January +9 °C. However, in some areas of the state, heavy snowfall and blizzards can occur during the winter. In late summer – early autumn in areas remote from the Gulf of Mexico, the hurricane season begins. The southern part of Mississippi is especially affected by natural disasters. In 1969, the devastating Hurricane Camille passed through the state, and in 2005, almost 240 people died due to Hurricane Katrina. The state is also prone to tornadoes. More than 20 tornadoes are observed here annually.

Things to Do in Mississippi

Mississippi is known for its music and literature. It was here that the blues originated and developed during the cotton crisis. It is impossible not to note the role of the state in the development of rock and roll. His “king” Elvis Presley was just from the city of Tupelo. Mississippi gave the world playwright Tennessee Williams and Nobel laureate writer William Faulkner.

Jackson regularly hosts an international ballet competition. And the town of Starkville hosts the independent Magnolia Film Festival every year.

In 1972, the University of Mississippi bought William Faulkner’s family estate, called Rowan Oak, and preserved exactly as it was during the writer’s lifetime.

Vicksburg is the cultural center of the state, best known for the Military Historical National Park. In 1863, Jackson was besieged for 47 days. The fortifications on the territory of Vicksburg have survived to this day; these are the main attractions of the park. On its territory there are 1325 historical monuments and memorials. This is a real historical complex, which includes trenches and trenches with a total length of 32 kilometers, two old houses, 144 guns. There is also a cemetery where soldiers who fought for independence are buried.

In 1966, Vicksburg Military Historical Park was added to the National Register of Historic Places. More than a million tourists visit it every year.

Government funding for the park is barely enough to make ends meet. The main source of income is donations from organizations and sponsors. Nevertheless, open days are held periodically in Vicksburg, when the entrance to the park is completely free.

Another attraction of the state is the Mississippi Petrified Forest, which is a national natural monument. And if you want to visit something special, then go ahead – to the world catfish festival in the city of Belzon.

During the war, the city was destroyed by United States General William Sherman, so very few valuable historical buildings survived. One of them is the 1839 Capitol. Today, the Mississippi History Museum operates here, the exhibits of which reflect the history of the state’s struggle for civil rights. Old black-and-white films tell about it.

A wonderful place for a family excursion is the Museum of Agriculture and Forestry. Among the exhibits is a farm built in 1850 with a vegetable garden and a barnyard, a miniature of the main street of the city of the 30s of the last century with the largest sweet shop.

Of interest to tourists are the Folk Art Gallery, where you can buy a souvenir made by the Chocat Indians, the local Munell Ardens Zoo, and the Mississippi Museum of Natural Sciences.

If you are in Mississippi, look at the port and the important tourist center of the state – Biloxi. Especially if you are a gambler: the city has a network of well-known gambling establishments. Biloxi also has a lighthouse and a national library.

Do you want a real tree in a pot? Then don’t drive past the town of Olive Branch. Here is the largest bonsai nursery in the country, where they grow and sell all kinds of bonsai trees.

The most hospitable city, petrified forest and catfish festival

And, of course, since you are in a hospitable state, you simply cannot help but visit the town of McComb. He repeatedly received the title of “The most hospitable city in the most hospitable state.” For what – find out for yourself! Another attraction of the state is the Mississippi Petrified Forest, which is a national natural monument. And if you want to visit something special, then go to the world catfish festival in the city of Belzon. It is held in April and attracts over 30,000 people. The fish even walk here!