The Americans had to buy this state from France along with other territories in the province of Louisiana in the early 19th century. Despite the unofficial nickname “sleepy”, Missouri is actually full of life, and tourists do not leave here disappointed. 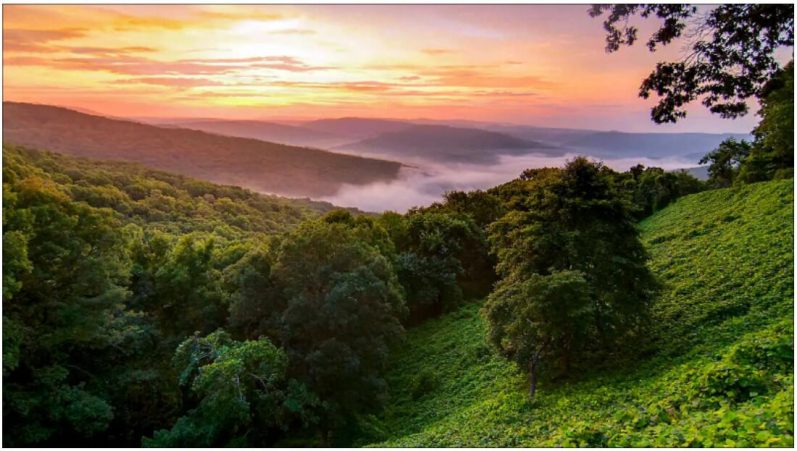 The most famous tourist spots in Missouri are the Ozarks, Mark Twain’s House and Cave in Hannibal, the Silver Dollar City, the fountains in Kansas City, the Gateway Arch in St. Louis.

The state capital is Jefferson City.

You can get to Missouri in 10 hours, but with a transfer in New York. Naturally, the more convenient the connection of flights, the more expensive the ticket. Prices vary depending on the number of transfers and waiting time.

Missouri has a continental climate. It has cold, by American standards, winters and hot, humid summers. In July, on average +25 °C, in January +5 °C. Frequent rains occur until June. Tornadoes occur very often in the state – about 35 per year.

The most famous tourist spots in Missouri are the Ozarks, Mark Twain’s House and Cave in Hannibal, the Silver Dollar City, the fountains in Kansas City, the Gateway Arch in St. Louis.

St. Louis greets guests with its most prominent landmark – the Arch. Its height is slightly less than 200 meters, it is a symbol of the transition of the eastern part of the United States to the western one, and it is dedicated to the first settlers of the West. In capsule elevators, tourists are taken to the observation deck, from where such a view of the city opens up that words cannot express! Even the neighboring state of Illinois is visible!

Under the Arch is a museum of national expansion, which is a must-see. The history of the United States is told here not by live guides, but by mechanical speaking figures.

St. Louis is located on both banks of the Mississippi River, which is why boat trips on old ships with the names of Mark Twain characters are very popular among tourists. Or you can just sit in the restaurant ship and admire the great river. Romantics should take a ride through the center of St. Louis in a carriage, and fans of extreme sports are advised to take an air tour. 20 minutes by helicopter over the city will cost 150 USD per person. Prices on the page are for July 2021.

House and cave of Mark Twain

Missouri is interesting for places that are described by Mark Twain in the famous “The Adventures of Tom Sawyer”. The city where the writer spent his childhood is Hannibal, but he hid it under the name of St. Petersburg. Here is the restored house of Mark Twain, and opposite it is the fence of Tom Sawyer.

Every year on July 4th there is a Tom Sawyer fence painting competition!

In the city you can also see the house of Becky Thatcher, the cave where Tom and Becky got lost, as well as a monument to Twain’s heroes.

Do not confuse: on the opposite bank of the Mississippi and already in another state, there is also Kansas City. We are talking about Missouri Kansas, and so it stands out from all other cities, not only in the United States, but also in the world, with its fountains. It began to be decorated with water structures in the 1920s. Some of the fountains were created by local craftsmen, some were brought from Europe. The water extravaganza is complemented by a rich green design; tourists compare the streets of Kansas City with those of Paris. Local residents are sure: the superiority of their city is obvious.

Plateau of the Ozarks

The entire region around the Ozarks is considered a recreational area where it is good to travel with children. There are many resort places here – lakes, mountains, and the entertainment industry is well developed.

Silver Dollar City is a park in Branson. This is a kind of monument to the dollar that created the US economy. The park city has a municipality, a post office, shops, a hotel, a farm and even a village school, many bars, pastry shops, but they are very small and decorated with flowers.

“City of the Silver Dollar”

The City of the Silver Dollar is actually a park in Branson. It was broken in 1960 on the site of an old adit where silver was mined. So the developers decided to create a kind of monument to the dollar that created the US economy. There is a municipality, a post office, shops, a hotel, a farm and even a village school.

There are many coffee houses, bars, pastry shops in the park city, but they are very small and decorated with flowers. Flowers in general are the main attribute of this unusual city.

Several roads lead from the central square, one of them leads to the amusement park, the other leads past the city of craftsmen, where you can see in the shops how candles are cast, how bread is baked, how jewelry is made… All this can be bought right away. The park is open from early March to late December. Remember: taxis and buses stop a few kilometers from the entrance, you can walk or drive on tourist cars.

In addition to the most popular park in the states, Branson has a lot of other useful entertainment. Although it is called “Las Vegas for the Puritans.” The city has more than 40 theatres, 5 thousand places for tents, more than 350 restaurants, 9 golf courses, more than 200 retail outlets. There are also caves – for example, Marble. And a few miles from the city – excellent bases with water parks and fishing.