If you are tormented by the laurels of Indiana Jones in search of a sacred artifact, then you definitely need to visit New Mexico. The indigenous people of this colorful, Indian-Hispanic US state call their land “enchanting”, describing the unique natural landscapes and ancient secrets of the Pueblo people who lived in New Mexico in the 12th century. At present, New Mexico is the most important center of American Indian culture; about 50 ethnic groups of the indigenous population have survived here (the most numerous is the Navajo people). 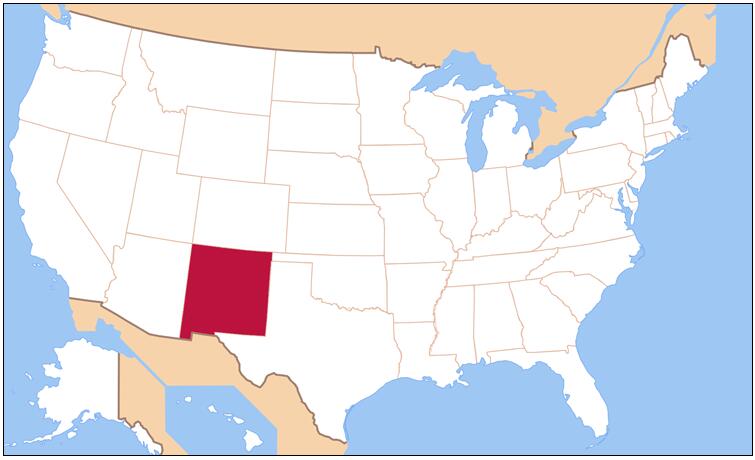 The Roswell military base is a place of annual pilgrimage for UFO fans, because it was here in 1947 that a statement was made about the discovery of traces of alien origin. Even after attempts to refute the classified status of the find, it still torments the minds of those who are not indifferent.

A bit of history

In the 17th century, New Mexico attracted the attention of the Spaniards, who rushed here in search of gold. And from that moment on, the history of the state is the history of bloody colonial wars between Mexico and the United States. As a result, New Mexico joined the states in 1912 and by the 40s of the 20th century became the site of the largest scientific and military base for nuclear energy and space research. In the infamous Los Alamos in 1945, the first ground test of an atomic bomb took place. And it is in the desert southwest of New Mexico that Spaceport America is being built, where in the near future the dream of all science fiction writers about the possibility of flights for “space tourists” will come true.

How to get to New Mexico

In Albuquerque, tourists are served by Sunport International Airport: 505-244-77-00.

In the satellite city of Santa Fe – Lamy at the Amtrak train station, the Chicago – Los Angeles train stops daily, and you can also transfer to the express bus from the station to downtown Santa Fe.

How to navigate New Mexico

New Mexico is located in the western United States and occupies a vast mountainous and sandy territory of 315,194 sq. km (one of the largest regions in the country). The Enchanting Land is bordered by the states of Colorado to the north, Oklahoma to the northeast, Texas to the east, Arizona to the west, and Mexico along the Rio Grande to the south. The state also has an unusual geographical feature: at the point with the speaking name “Four Corners”, where the western border of the state flows into the southern one, the borders of four states intersect at an angle of 90 degrees (New Mexico, Colorado, Arizona and literally at one point – Utah ).

If you stand at the “Four Corners” point in a special way, then your arms and legs can be simultaneously in four different states. Tourists, of course, cannot miss this opportunity and vying with each other to take pictures in funny poses at a special sign.

Entertainment and attractions in New Mexico

New Mexico attracts tourists not only with unique natural attractions, but also with historical monuments of Indian culture: a UNESCO heritage site – Taos Pueblo (representatives of the Pueblo people still live in millennial houses), Aztec ruins, Bandelier (Frijoles Canyon with pueblo ruins), rock dwellings in the Gila Valley, the Petroglyph National Monument in Albuquerque, the remains of Fort Union, and many others.

The International Flamenco Festival in New Mexico is no less popular than in the birthplace of dance, Spain.

In addition, the state is known for its active creative life. The capital of Santa Fe is considered a prestigious center for contemporary art, along with New York and Los Angeles. Museums such as the Museum of New Mexico, the Georgia O’Keeffe Gallery, the International Folk Art Museum, and the Wheelwright Museum of the American Indian are located here.

The inspiration for contemporary art is the rich heritage of not only Indian culture, but also Spanish, which is carefully preserved by numerous cultural centers. Thus, the international flamenco festival in New Mexico is no less popular than in the birthplace of dance – in Spain.

Santa Fe is imbued with the charm of colonial Spain and sophisticated simplicity.

The Palace of the Governors (1610) on Plaza Square, the Capilla de Nuestra Secora chapel with a statue of the Madonna (1625), the Cathedral of St. Francis, the monastery of Guadelupe – visiting them is like visiting medieval Spain.

Every year, UFO fans come to New Mexico for the UFO festival, which takes place near the Roswell military base. The place was not chosen by chance. Here, in 1947, the military command announced the discovery of traces of alien origin. Later, a refutation was given with information that the find turned out to be a balloon, but its classified status has been tormenting the minds of those who are not indifferent for many years.

The small town of Lincoln attracts tourists with memorable places associated with the name of the legendary man, the famous American criminal of the 19th century – Billy the Kid. This real-life character has become a cult following after numerous films have been made about his adventures. The unquenchable romance of the western excites both fans of this genre of cinema and fans of American history.

In the north of New Mexico, the Sangre de Cristo mountain range (translated from Spanish as “the blood of Christ”, the name is associated with the characteristic red color of the rocks), the San Juan, Hemez and Sandia ridges stretches. The height of most of the mountains that form the Sangre de Cristo reaches 3,500 meters above sea level. Wheeler Peak is the highest point in the state at 4,013 meters.

In the southeast are the Guadalupe Mountains, known for one of the most popular American national parks – Carlsbad Caverns. This is a chain of karst caves, the relief of which began to form 500 thousand years ago, and this process continues to this day.

Individual caves are under active change and represent a natural “underground laboratory” where geological processes can be observed in natural conditions.

Another unusual natural site in New Mexico is the White Sands Reserve, which covers an area of ​​59 thousand hectares of the desert Tularos Plain, sandwiched by the San Andreas and Sacramento mountain ranges.

Giant piles of sparkling sand have been formed for thousands of years as gypsum layers break down and particles are sifted in an arid climate. Sand dunes 18 meters high are formed into a belt 8 meters wide, 40 kilometers long, which constantly moves under the pressure of the wind, forming bizarre patterns. The sight is truly mesmerizing!

Perhaps the most famous New Mexico farm product is the chili pepper. The southern town of Hatch even competes for the title of “Chile Capital of the World”.

Every year on the US national holiday – Labor Day, celebrated on the first Monday of September, at the Chili Festival in Hatch you can try not just spicy, but very spicy Mexican cuisine.

There is even a special route for culinary tourism – the “chili road”, which certainly passes through this small town.