Oregon, or the “beaver state”, is one of the large Pacific states of the United States, located in the northwest of the country and bordering the states of Washington, Idaho in the north and east, Nevada and California in the south. The capital of the state, Salem, was previously an Indian settlement, and the largest city, Portland, is known for the title of the greenest city in America and for its star residents: the master of postmodern satire Chuck Palahniuk, the legend of the fantasy genre Ursula Le Guin and the “father” of the animated series “The Simpsons” Matt Groening. The state university is located in Eugene. 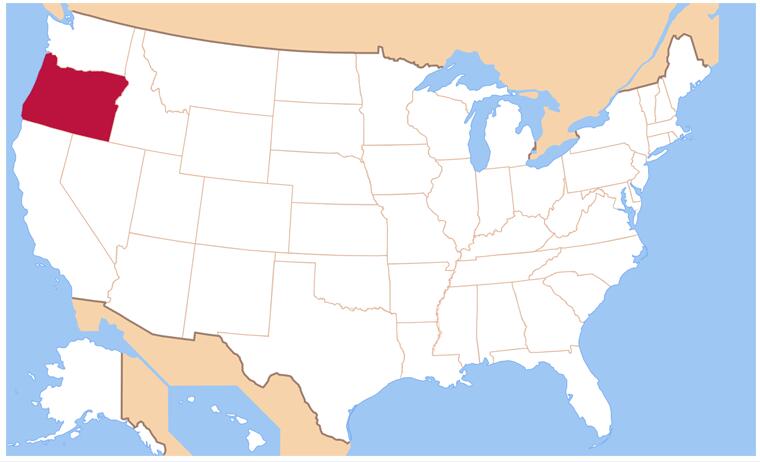 Every July, the Willamette Valley hosts the International Pinot Noir Festival. This is the oldest event in the world of American winemaking of its kind.

In terms of area, Oregon is in 9th place among its fellows in the union (255 thousand sq. Km). Such a vast territory includes a variety of natural regions, which adds to the attractiveness of the state in the eyes of tourists. In addition to mountainous areas, ocean coasts and picturesque river valleys, you can even find desert salt marshes here.

In addition, Oregon is a successful rival of California’s Napa Valley in terms of sophistication and variety of wine products. Unforgettable pleasure can be obtained from the wine tour of the Willamette Valley. For more than 80 years, the tourism industry has been developing in the state, so the level of service and variety of entertainment offered to the guests of the state will be able to satisfy even the most demanding taste.

How to get to Oregon

If a trip to the United States starts from Oregon, then from Russia it is cheaper to fly to Los Angeles or New York, and from there to Portland. Direct flights from Moscow to Portland are quite expensive. Portland International Airport is located 6 km northeast of the city. Airport Information Phone: 877 739 4636.

It is better to rent a car for trips around the state in Portland. Moreover, without a car it is absolutely impossible to make tours of the Willamette Valley. Be careful: parking at the main attractions, parks and museums is paid.

Fans of rock and forest hikes will definitely go to the Cascade Mountains of Oregon, to the realm of potentially dangerous volcanoes. The largest of them is Mount Hood (3429 m). In the center of one of Oregon’s many reserves, the Deschats National Forest, there is another large volcano – Newberry (2,435 m). A popular tourist route also runs through the Crater Lake National Park, founded in 1902 in the south of the state.

The lake in the crater of the once active Mazama volcano is the deepest in the states (594 m) and is famous for its transparency and unusually blue color of the water, due to the specific method of feeding only rain and snow water.

To the east of the Cascade Mountains, a vast area is occupied by the so-called “Oregon High Desert” – arid lands at an altitude of 1200 m above sea level. The Pacific coast of the state is rich in sandy beaches, numerous coastal shoals, rocky bays and bays.

About 100 kilometers southwest of Portland is the Willamette River Valley, a bucolic paradise of fertile land. Tourists from all over the world come here for the so-called wine tours. The Willamette Valley revels in its anti-Napa status as local winemakers are not chasing the grandiose profits of their Californian rival but are busy improving the quality of exclusive wines.

Oregon Pinot Willamette is in no way inferior to Burgundy Pinot Noir.

However, it is this legendary wine that is dedicated to the International Pinot Noir Festival, which is held in the Willamette Valley every year in July.

It’s best to come here in the sunny late spring or summer, because October to June is the rainy season in Western Oregon, and the valley can be shrouded in mist. Although, it even adds a mysterious flair to your journey through the valley.

Willamette offers small hotels and cozy restaurants with good cuisine. Such as the:

A parade of wines to try when in Oregon

Entertainment and attractions in Oregon

It is simply impossible to remain indifferent after an underwater excursion on a real military submarine, the last non-nuclear USS Blueback.

A visit to the museum is quite an expensive pleasure, since the entrance to each exposition is paid separately, but children’s emotions are worth it. Address: 1945 SE Water Avenue, Portland 97214

Although the Oregon Zoo is located on the outskirts of Portland, it is most convenient to get to it by public transportation, as parking can be a problem. The zoo is very extensive, with a variety of animals from different geographical areas. Here are monkeys, and elephants, and giraffes, and Canadian grizzlies. The zoo is adapted for people with disabilities. Don’t be afraid of large areas, a free Zoomer delivers tourists back to the start of the tour. Address: 4001 Southwest Canyon Road, Portland 97221-9704.