Rhode Island (The State of Rhode Island and Providence Plantations), or “baby rodi”, is one of the states of New England, located in the northeastern United States, on the coast of the Atlantic Ocean. The capital and largest city is Providence. This is the smallest of the states, its territory is only 3,140 square meters. km. Historically, Rhode Island is known for being one of the 13 American colonies that declared their independence from England and united into the United States. 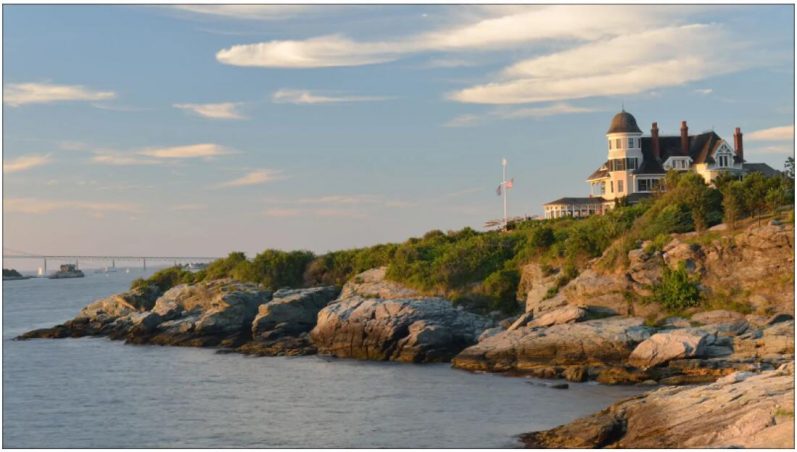 In the 19th century, Rhode Island was the “summer capital” for high society in New England, and the modern secular audience, mainly from New York and Boston, is attracted here primarily by the beaches of the coast and entertainment mass events, festivals and holidays.

Rhode Island can be called a land of hope and freedom. It was founded in 1636 by the English priest Roger Williams, who preached religious tolerance for European settlers and protection of the rights of the native Indians of the Narragansett tribe. Leading US politicians, including Presidents Thomas Jefferson and John Adams, argued that it was Williams’s ideas that became the basis for the 1st Amendment of the Constitution, which enshrines freedom of religion, speech and public assembly for citizens. Modern Rhode Island carefully preserves its historical past, on which the democratic statehood is based, so honored by the Americans, sometimes excessively pathetic, but always worthy of respect.

Neighboring Rhode Island are Massachusetts to the north and east and Connecticut to the west. The southern border is formed by the Atlantic Ocean, in the southwest there is a small segment of the border with the state of New York. Rhode Island is also called the “Ocean State” because of its long coastline. This geographical location is very favorable for summer tourism and recreation, but at the same time there is a risk of being hit by the elements in winter, when strong winds hit the coast of the state, bringing blizzards and storms.

How to get to Rhode Island

The nearest passenger airport to Providence is Boston Logan Airport. Tel. 617 561 1600. From Boston and New York, Rhode Island is easily accessible by car or shuttle bus. Developed in the state and daily rail links between Providence and Boston, New York, Washington, Philadelphia and Baltimore.

To travel around Rhode Island, you can choose a car and regular bus service. The Rhode Island Department of Public Transportation offers 54 regular bus routes and 8 tourist routes.

Tour buses are stylized to look like the 1920s era.

The highest point in Rhode Island is Jerimot Hill (247 meters), located almost on the border with Connecticut. It is privately owned, so for a long time excursions to it were prohibited. There is even a popular joke in Rhode Island that more people have climbed McKinley Peak in Alaska, the highest mountain in the United States (6194 meters), than Jerimot Hill.

An Indian tribe living in the state gave the name to the main bay of the region – Narragansett. The entire eastern part of Rhode Island is lowlands around the bay. The Narragansett area is approximately 380 sq. km, it includes more than 30 islands, the largest of them are Aquidnek (or Rhode Island), Konanikut and Prudence.

The western part of the region is a hilly upland with many rivers and streams, very popular with anglers. Pike and perch abound here.

Trout fishing season opens every year on the second Saturday of April at dawn.

The hills of Rhode Island are covered with oak, maple, ash and beech forests, in which hunting is allowed, as well as wildlife watching.

For lovers of exploring the coastal ecosystem, Rhode Island is one of the best places on Earth.

Many species of songbirds and marsh birds live here. Special routes have been developed for observation and photography, and many parks are equipped with special shutters for this purpose.

For the convenience of tourists, enthusiasts have laid special hiking trails for hiking in Rhode Island, both in the wild and in specially organized parks:

Entertainment and attractions in Rhode Island

In the 19th century, Rhode Island was the “summer capital” for high society in New England, and the modern secular audience, mainly from New York and Boston, is attracted here primarily by the beaches of the coast and entertainment mass events.

During the summer, Providence hosts the annual Lights on the Water, or Floating Lights Festival, which was established in 1994 and has become a symbol of the city’s rebirth. Vibrant performances adorn Providence from May to October.

In the evening, torches and bonfires are lit on the three city rivers, and music plays on the banks, vocal groups, circus artists, magicians and acrobats perform.

An atmosphere of general fun reigns, which unites spectators and participants in a single creative impulse.

Newport hosts annual festivals of classical music, jazz and folk. Anyway, Rhode Island is an extremely musical state, there are many national and amateur orchestras.

The Providence Zoo is the oldest zoo in the United States. Here, as much as possible, the natural habitat for a variety of animals, such as elephants, giraffes, giant anteaters, kangaroos and others, is imitated.

Of the state’s attractions, the most interesting are the Tennis Hall of Fame, the First Baptist Church, founded by Roger Williams in 1638, the oldest topiary park in the country, Roger Williams Park and the Providence Zoo.

Victorian Roger Williams Park, opened in 1878, is located on 430 acres of land with water channels, gardens, gazebos, the Village Carousel, the Museum of Natural History, the Planetarium and its main jewel – the Roger Williams Zoo. This oldest US zoo (opened in 1872) imitates the natural habitat as much as possible for a variety of animals, such as elephants, giraffes, snow leopards, giant anteaters, kangaroos, pandas, gibbons and others.

Gambling tourists are also attracted by Rhode Island casinos (Twin River in Lincoln and Newport Grand in Newport), where in addition to slot machines, you can bet on the results of horse racing or dog racing.