Texas – the second largest and most populous US state, plays a huge role in the development of agriculture and cattle breeding in America, in addition, it is an important industrial and economic center.

The capital of Texas is Austin.

The name of the state comes from the Indian word taysha, which in translation from the language of the Caddo tribes means “friend” or “ally”. 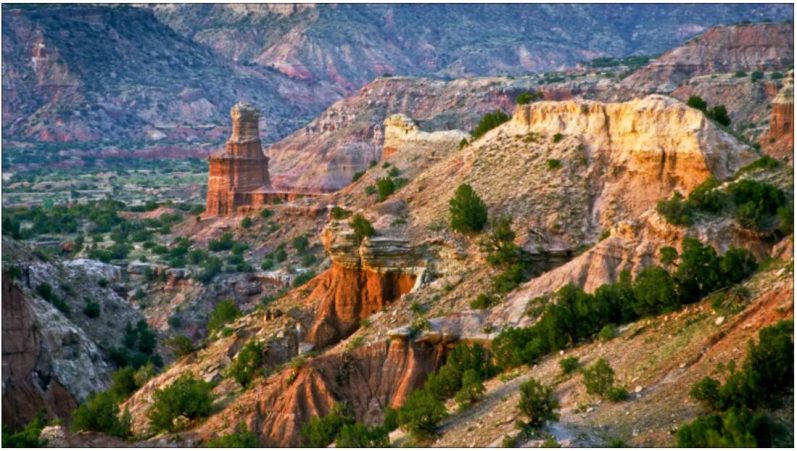 The largest cities in the state:

How to get to Texas

Texas is located on the border with Mexico, next to it are the US states of Oklahoma, New Mexico, Arkansas and Louisiana.

By plane and train

Texas has several international airports, the largest of which is located in Dallas – Dallas / Fort Worth. In addition, there are major airports in Houston, San Antonio, El Paso and Austin.

If you plan to travel around Texas by car, remember not to rely on luck and always have a supply of gas with you. You should observe the speed limit near any settlements – they really strictly monitor this there. Some areas of Texas top the U.S. road accident statistics, so be careful.

There are several major ports in Texas where passenger ships arrive, including Houston, Corpus Christi, Galveston, Beaumont, and Brownsville.

Texas is located in two climate zones. In the south of the state, along the coast, a hot subtropical climate prevails, and in the central part and in the north the climate is continental, with an average winter temperature of +1 °C to +15 °C and an average summer temperature of +25 °C to +30 °C. The western part of the state is quite arid, with frequent tornadoes in the center and occasional tropical rainfall along the coast.

To move around the state, it is quite convenient to use Greyhound buses, Amtrak trains, or the services of any of the major and local airlines serving airports.

Barbecue is an important part of any true Texan’s diet. In addition to the usual recipes throughout America, Texas has several of its own. Chili is also considered the official dish: here you can try many varieties of this dish, including the original original Texas chili prepared without beans.

Tex-Mex is a distinct cuisine born from a combination of Texan and Mexican culinary traditions. Chicken steaks are another extremely popular dish in Texas. They are made with breaded chicken and fried in oil, usually served with spicy sauce, mashed potatoes and beans.

In addition, several popular beers are produced in Texas, including Shiner Bock, the state’s highest-selling beer, and Lone Star Beer, considered the “national beer of Texas.”

Entertainment and attractions in Texas

The King Ranch is the largest ranch in the state, located on the Gulf Coast. El Paso – the largest city on the border with Mexico – is the center of Spanish culture in all of America. Nature lovers should visit the Big Bend National Park, through which the Rio Grande flows. many Texas wildlife can be seen in the Park, and at the western entrance is the old ghost town of Terlingua, home of the annual Chili Festival.

Also in Texas there is the National Park “Guadalupe”, which is the peak of Guadalupe – the highest point in the state, McKittrick Canyon and a beautiful oasis. Also of interest are the Hill Country, vast fields full of wild flowers and cattle ranches, and Palo Duro Canyon, the second largest canyon in the state.

About ten kilometers from the Texas town of Del Rio on the border with Mexico lies the important recreation area Amistad National Recreation Area. There is a reservoir of the same name with azure blue water, which was built on the Rio Grande River. It is here that the Rio Grande meets the Devils River and the Pecos River. The Spanish name Amistad means “friendship”.

The dam was built here in 1969 and today it provides excellent swimming conditions, which is appreciated by anyone who drives through this heat-scorched landscape and dreams of the refreshing beaches of the Gulf of Mexico. The hidden nooks and crannies against the backdrop of the high walls of the limestone canyons attract water sports fans from all over to Amistad. There is a $4 entrance fee to this recreation area, and four year-round campsites are also available to visitors.

People come here mainly for the varied recreational opportunities, such as boating, fishing, hunting, swimming, diving, water skiing, as well as camping and picnicking opportunities. Experienced divers like to visit the local deep underwater caves, which are accessible to them. However, they are very dangerous, so only professionals should really venture into them, not tourists without extensive training and preparation. The area is also a valuable geological and archaeological site and you will also find a number of plant and animal species.

Amistad is a popular destination for the residents of the town of Del Rio and a great place for devotees of all kinds of water sports. Amistad was designated a National Recreation Area on November 28, 1990.

The Big Thicket is a densely forested area in the southeast of the US state of Texas. Although no exact boundaries are defined for this reservation, it covers most of Hardin, Liberty, Tyler, San Jacinto, and Polk counties. The San Jacinto River, Neches River and Pine Island Bayou form the natural border. To the north, the Big Thicket Reserve is part of the unique Piney Woods ecosystem.

The Big Thicket National Preserve is one of the most significant and biologically diverse areas in the world. The reserve was established in 1974 to protect the many plant and animal species found within it. Virgin cypresses and forest pines grow here. The landscape consists of forests, meadows and swamps. The animal kingdom here is represented by almost 300 species of birds that either live here or just migrate. You can see up to 50 species of reptiles here, and here and there you can also spot alligators, frogs and toads.

The Big Thicket, along with the Big Cypress National Preserve in Florida, became the first national preserves under the management of the National Park Service. Both were recognized by Congress on October 11, 1974. The Big Thicket was also declared a UNESCO World Heritage Site in 1981. The reserve consists of nine separate landscape units and six water corridors.

Popular activities that visitors can do in the reserve include hiking, camping, cycling, horse riding, canoeing, bird watching and fishing. Visitors to the Big Thicket will surely be impressed by the unspoiled nature here. It is a pleasant place for relaxation and education for the whole family.